(Welcome, compassion bloggers! I am a host, so there’s a linky at the end of this. If you have a compassion post and you are looking for a linky, do scroll to the bottom without reading and add your link. I don’t mind, and this post is will be here whenever you have the time for it.)

I signed on to publish a post about compassion just a day or so after Lizzi inspired Yvonne to start the Facebook group. I discovered it as early as I did thanks to my friend Gretchen. I knew this was a good idea the minute I saw it, but I had no clue so many other people would come along. I am thrilled to be a part of it, and grateful to all the friends who not only signed on but have given a little of their time and social media space to help spread the word (especially you #WeekendCoffeeShare peeps). 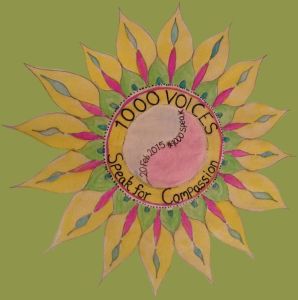 I knew before I even clicked “Join Group” that I wanted to write a post about compassion and nonviolence. I’ve studied political theory and social movements more thoroughly than just about any other areas of knowledge. I rarely get to blog about that stuff, because I am a geeky, audience-building blogger, and social science blogging is a tough market to break into for a dude without a Ph.D.

When I talk about nonviolence, I am talking about more than just abstaining from physical violence. I’m talking about a way of doing positive social change (which I think we could do with a bit more of in my own country). It requires a specific way of thinking and living to be effective. Basically, you have to develop a clear understanding of your ethic and train yourself to live it. And it has follow certain principles, but still be right for you.

If you adopt the the principles of nonviolence as a code and work at the living by them until you master them, you will gain personal power.

The principles and methods were developed by Gandhi during his resistance to colonialism in South Africa and India. Martin Luther King, Jr. applied them to the Civil Rights Movement in the U.S. and his experience persuaded him to speak out publicly against the Vietnam War.

Nonviolence lends itself well to a religious approach, but I don’t believe you have to be religious to practice it. It requires an intellectual journey and a moral transformation, though, even if you are not a spiritual person. It is not an easy thing. Here’s the power it gives you.

For the sake of clarity. Nonviolence as I am using it here does not require you to surrender your right to self-defense against criminal assault or become a political pacifist.

You obviously want to defend your person and property against outlaws and rapists, and sometimes military action is just a necessity. But if you are committed to nonviolence, you want to be on the lookout for chances to support efforts to address problems that lead to criminal assaults. Things like youth violence, sexual assault, and drug control policies that create incentives for organized crime.

“Without retaliation” applies to situations where you see something that needs to change and you say so, but saying it provokes violence from authorities or political opponents. In those situations, you can’t respond with violence because that only leads to escalation, which turns into a cycle of violence and resentment. And the next thing you know, what started as a peaceable attempt to help some people who are being abused is causing either riots or organized civil conflict. Which gives the authorities an excuse to ramp up the violence in the name of keeping order and to arrest people for speaking out.

This applies not only to physical violence, but to rhetoric as well. So no dehumanizing labels for people. No coercion, no threats, and no passive aggression in the service of a social or political cause. Challenge that stuff when you see happening in a forum where a challenge is appropriate. Report it if it’s actionable.

If enough people endure political violence without fighting back for opposing a specific injustice long enough, the injustice will be addressed. Here’s why.

That’s the basic theory. It works.

Here’s how nonviolence relates to compassion – and what makes this a #1000Speak post. When we talk about social injustices, we are talking about systematic behavior that children learn from their parents and from institutions. Everyone is caught up in the system, and everyone involved in oppression is damaged by it. Even passive witnesses. Even the people who are carrying out the oppression. So it is important to empathize with the oppressors even as you resist them. And that kind of empathy requires loads and loads of compassion.

This is why I often say “attack ideas, not people,” and I do my best to police my own behavior. I’m not perfect and my own transformation is not complete. But I give it an honest try, both online and off.

The reason nonviolence lends itself so well to Hindu and Christian approaches (and Buddhist and Jainist approaches, for that matter,) is that it’s founded on the principle of Ahimsa. That translates well into a concept that Christians who take “love thy neighbor as thyself”seriously can understand and apply.

I don’t come at it from a religious perspective because, even though my spiritual leanings inform my ideology, I don’t mix religion into my politics. A rational, secular approach to politics is a core commitment for me. I’m an emotional idealist, but I am an intellectual realist, and there is no war quite so nasty as a religious war.

Thankfully, human rights is a well-developed school of thought with its own lexicon. Here are King’s Six Principles of Nonviolence. The first five are no-brainers. They fit simply and easily into the human rights discourse. The sixth one bears a bit of discussion. I chose King’s principles rather than Gandhi’s for this because I am an American who grew up in a Christian household, so I have a better frame of reference for them.

I am just not sure about that last one. I am inclined to think that the universe is what we make it, and justice is a concept we define through social interaction. Now, don’t get me wrong. Injustice offends me, and I am good at sniffing it out. Justice makes me happy, and I know it when I see it. But. 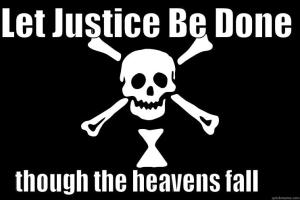 You have to believe in some form of natural law to believe that the universe is on the side of justice. Any time I try to believe in natural law, though, I run smack into the Melian Dialogue, and I think Thucydides has the right of that argument. It’s great when a bunch of people get together and decide to make the world better, and they all have a god to rely on and help them along and it works. It is even greater when a bunch of people just decide to speak the truth and take the beating instead of giving in and living the lie. Because those first five principles allowed them to find it within themselves to do it.

Those of you who have been following my quest to teach myself the art of online collaboration for the last year might recognize the process. I use variations of it all the time to float ideas and figure out which ones to run with – even nonpolitical ones. It is useful for all kinds of things which require people to come together and cooperate. I apply other theories to sort out things like how much feedback constitutes support, whether timelines are doable, and when to make direct appeals as opposed to just mentioning things.

I’m steeped in theories, folks. I don’t blog about them much. But I am applying theories all the time on the Internet. Aside from a few things I do just because I’m hooked on the publish button, I have a reason for everything I do online. (Ask Diana if you don’t believe me.) I’m willing to teach friendly bloggers everything I know about this stuff, given enough time and interest, and always happy to answer questions or chat about it on a thread.

Happy World Day of Social Justice. Do let’s find a way to do something about all the human trafficking that happens in our world. Let’s at least acknowledge that it goes on. It is a settled fact that people should not be owned. But many are. By traffickers.

The person most responsible for me having all the knowledge to be applying the social theories on the internet and offering to teach the rest of you the magic spells spent most of his career explaining the evil that is human trafficking and searching for solutions. And that is all I am saying about that. I care about it, for several reasons.

Whatever else you do today, spread some sincere love. You never know when a random act of kindness might save someone’s life. When it does, you usually don’t realize how you affected that other person until much later. If ever. Sometimes you save peoples’ lives, and they never cross paths with you again. This is true. More than one stranger who I can never find, ever again, not even to say thank you, has saved my life.

Photo by Gene’O And ask permission before you use this one, plz!

Credits – Principles and Steps are from the King Center for Nonviolent Social Change. The images are all donated to #1000Speak as uncredited art, from the Public Domain, or credited in the captions.

49 thoughts on “For #1000Speak: On Compassion and Nonviolence”